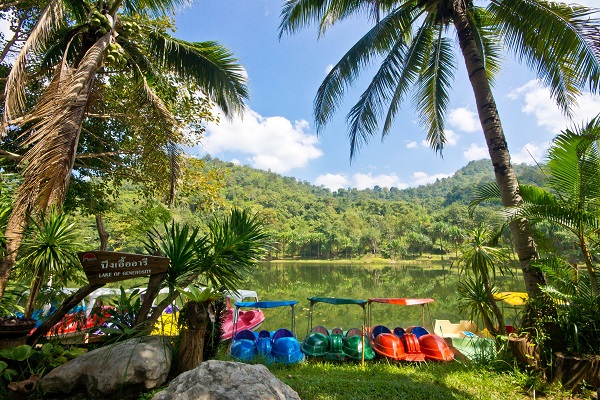 The Kanchanaburi province, an area filled with historical sights, nature and culture

Kanchanaburi is located in the western part of Thailand and is a province filled with rich culture and fascinating history. This combined with the fact that it is easily accessible from Bangkok makes it one the great locations to explore in Thailand. You can reach the area by train, busses or private transfer from Bangkok with a ride of approximately only 3 hours, which makes it a great day trip or 1/2 night trip.

Bridge over the River Kwai

While the area is known for being a touristic hotspot, the most famous part about the province is the city Kanchanaburi which has the River Kwai going through its centre. This River has a bridge going over it called the Bridge over the River Kwai, which played an important part in the Second World War. This bridge has a movie made about its history as well, with the same name as the bridge itself.

The historical aspect of the province does not stop with just the bridge, further into the province and into the jungle is also the Hellfire Pass. The Hellfire Pass is a part of the Thai-Burma Railway and often described as one of the hardest construction parts of the entire railway. Hundreds of Prisoners of War died while constructing the pass.

While the Hellfire Pass already felt like hell to construct for the War Prisoners, this was not the reason for it to be named as such. The real reason was because the workers had to work 24 hours a day which meant they had to work in the night as well and thus torches were lit in the pass. But as the pass was so narrow it looked as a picture from hell. Next to the hellfire pass is the Hellfire Pass Memorial Museum, which showcases the story of the Thai-Burma Railway and its tragedies that happened during the war.

The Home Phutoey memorial and gallery

Furthermore, at the resort Home Phutoey River Kwai there is Jack Chalker’s gallery and the Sir Weary Dunlop Peace Parks, these two memorials tell the story of the Prisoners of War during the Thai-Burma Railway and lets them showcase their experiences during this horrific period. The gallery is of a British man that went as a young art student to fight against the Japanese in the Far East, to be captured and joining 60.000 other allied prisoners. They were driven to their limits and many did not make it. Jack Chalker used his skills as an artist to show the stories in a different way, by painting many paintings, recording the misery. However, he also painted the heroism and friendships of the prisoners during these hard times filled with starvation, diseases and ravages.

The second story of Weary Dunlop Peace Parks integrates with the history of the Home Phutoey resort. When Sir Edward “Weary” Dunlop returned to the River Kwai, himself being a survivor of the Burma-Thailand Railway, he and his fellow group of veterans met a Thai man. Mr Kanit met Weary Dunlop as Weary asked for a refreshing cold beer which sadly was not sold in the shop, however Mr Kanit brought the man up to his house, the house which was and still is Home PhuToey. This was the beginning of a great friendship between the two that lasted all the way up to the death of Sir Edward Dunlop. Sir Edward Dunlop had his ashes spread out over the country he fell in love with, Thailand, and his great friend Mr Kanit build the memorial in remembrance of the friendship between the two.

Next to the many touching and intriguing historical attractions, Kanchanaburi also provides many other sights and things to do such as the stunning Erawan Waterfalls. These waterfalls are located further in the jungle and provide a beautiful sight of multiple layers of the falls. Come to Kanchanaburi and be pleasantly surprised by the beauty and entertainment the province provides you.